The block geometry files, which handily describe all the census blocks, don't do the best job of describing water. They have fields for the area of land and area of water encompassed, but they're too often not 100% either way. The "faces" level is much finer geometry, each block being made up of several faces, much bigger data files, and the Census breaks up the data files into batches for each county. Every face is either all land or all water.
If you look at my current maps, you can see what happens when I ignore water and just color in everything belonging to a block:

Massachusetts gets a little bulbous around the cape and islands where the blocks extend to some distance off the shore.
Here's a new map I just made with improved shapefile rendering of "faces" data: 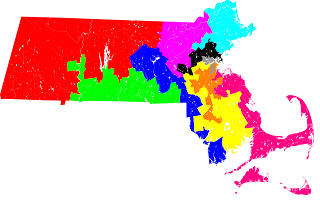 That's the current congressional district map of Massachusetts, but with much better coastal detail and with rivers and lakes too!
Posted by Brian Olson at 9:15 AM 2 comments:

Email ThisBlogThis!Share to TwitterShare to FacebookShare to Pinterest
Labels: hack