The problem with New Hampshire

Just now I look at my software and at New Hampshire and realize I can't do their House of Representatives because I'm only using 1 byte for the district number and they have 400 representatives.

Maybe storing the district number as a byte turns out to have been premature optimization, but I think in an early version of the software I was holding many full mappings in memory at once, so it made more sense back then. Now that I'm just holding one at a time I could upgrade to 16 bit numbers, that advanced technology of 1980.

Also I still haven't written an Alaska filter to munge the data into a contiguous realm instead of breaking at -180/180 degrees longitude around the Aleutians.

But aside from that I think I have all the state data imported and most of the congressional and state legislature maps with at least one solution.
http://bdistricting.com/2010/
Posted by Brian Olson at 10:31 PM 1 comment:

NJ Incumbent Protection vs My Way

This story about proposed maps for the New Jersey State Senate suggests that a bipartisan incumbent protection gerrymander is in the works proposed by the Democrats.

Here's a comparison of the proposed map linked there and my current most compact map for the New Jersey Senate: 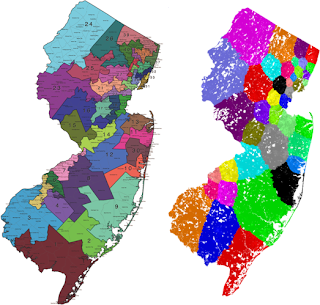