Just in case anyone is thinking about statehood, I've decided I should make some hypothetical maps for Washington, D.C. and Puerto Rico. (Someday, in September, when we have data.) 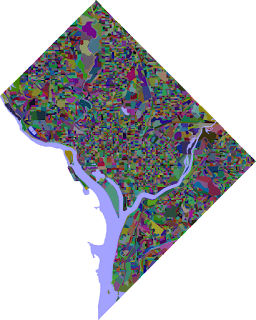 NPR reports that the US Census Bureau might not release redistricting data until September 30, long after the usual dates in February through April, or the previous delayed estimate of July. BDistricting's fully automated approach should be just fine though. In a crunch we can rent a bunch of cloud servers and have good results for any state as little as a day after the data is available.

The 2020 Census data for redistricting is immanent starting around 2021-01-19, but we don't have official reapportionment yet! The last report from the Census bureau was "early 2021, as close to the statutory deadline as possible". If they don't have proper apportionment out by the 19th, I guess I'll start my redistricting engine based on estimates (or this estimate, or others, or some consensus I put together).

In a decision released Thursday, June 27, 2019, Roberts (with Kavanaugh, Gorsuch, Alito, and Thomas) wrote 32 pages amounting to, 'Gerrymandering is bad, but aw shucks there is nothing we can do'. Kagan (with Breyer, Ginsburg, and Sotomayor), rebutted in equal length 'there absolutely is something we can do and we really should have'.

One of the innovations in these court challenges was the "ensemble" method of producing thousands of plausible maps and doing statistics across likely outcomes of those maps. Kagan found that this demonstrated "the State’s map was an out-out-out-outlier" in the case of North Carolina's map which was worse than all 3000 other proposed maps it was compared to. Roberts mocked this claiming, "Judges not only have to pick the winner—they have to beat the point spread." Roberts at other points wanted to avoid such 'hypotheticals', but Kagan found that "... the same technologies and data that today facilitate extreme partisan gerrymanders also enable courts to discover them, ..." Kagan isn't afraid of technology, it's not some weird magic black box to her. It's a tool, and it's not some weird hypothetical, it's a tool actually used to create real and effective gerrymanders, and the same tools can analyze and pick apart those gerrymanders.

With great handwringing, Roberts repeatedly claimed that there was no solid rule on which to base a decision or decree a change. Kagan responds with a long list of citations of Supreme Court and other Federal Court decisions that found rules and made decrees.

Kagan doesn't think we should wait for ballot initiatives either: "Fewer than half the States offer voters an opportunity to put initiatives to direct vote; in all the rest (including North Carolina and Maryland), voters are dependent on legislators to make electoral changes (which for all the reasons already given, they are unlikely to do)."

And on independent commissions, "Some Members of the majority, of course, once thought such initiatives unconstitutional. See Arizona State Legislature, 576 U. S., at ___ (ROBERTS, C. J., dissenting)"

Should we have Congress make a law restricting gerrymandering nationwide? Absolutely. We should have a new Voting Rights Act that ensures a fair process in every state. We should also have a Congress that will pass it and a President who will sign it.

We should also have a Court that will do their job. For over two hundred years the Supreme Court has been a check against bad laws. Gerrymandered district maps passed by state legislatures are bad laws. Instead of using their encyclopedic knowledge to write 32 pages of "we don't wanna" they should have done their duty to the Constitution and the people of the United States of America and defended our democracy.
Posted by Brian Olson at 12:39 PM 2 comments:

Another algorithmic redistricting implementation! "ALURE" (ALgorithmic Universal Redistricting Engine) (their only web presence seems to be that facebook page) looks like another recursive split algorithm like "shortest splitline", but keeping to north-south and east-west cuts and boxes.

It makes districts. They're pretty simple. Given the alternative of complex gerrymandered monsters simple sounds like a good feature.

My usual criticisms of "process" oriented districting applies. Nothing about this process will necessarily produce "good" districts. Its simplicity ignores all existing county and city boundaries which would make it hard to manage. (Something my own software misses too, which I 'm working on for 2020.)
Posted by Brian Olson at 9:55 AM 5 comments:

A new automated redistricting algorithm has appeared with concrete examples for Michigan and Virginia. It sounds like it's doing something like a minimum cut through the blocks that have lowest population. It winds up doing this in mostly horizontal or vertical lines, based on how the Michigan map looks. It mostly keeps counties together, but when it decides it needs to cut it can make a long cut on a straight-ish line through many counties.

In the dichotomy of solutions being "fair process" vs "good outcome" this is another "fair process" entry. I like its output subjectively better than the "shortest splitline" algorithm, and the county-cohesion feature will make it more practical, but I still think there's nothing inherent in its structure that will ensure a "good outcome". I still prefer to start at the end, define what kind of outcome we want, and achieve that by whatever methods happen to work. If we have the right metric, then optimizing to it will be okay. (On the other hand, the last century of industrial best practices point out that picking the right metric is problematic and good process needs to be blended with metrics for actual best outcomes.)

Missouri passed the "Clean Missouri" "Amendment 1" last November, and among other things it changes how redistricting gets done there.
tl;dr: they did some weird things I think will have messy unintended consequences

In 2021 they'll appoint a "non-partisan state demographer" who will do the first pass at map drawing. But the law has a pretty strict set of rules to design to.
In order of priority:

Their "Political Fairness" is what I call proportionality. It's interesting that they come at it from wasted vote, and I think that's probably a good measure, it's just a little inside out and backwards of how I usually frame this. I'd usually say "the party with 60% of the people should get 60% of the seats in the state legislature", but they're saying "the party with 40% of the people shouldn't have proportionally more of their votes wasted in districts they don't win than the other party wastes in districts it doesn't win". This 'efficiency gap' was a big deal in a recent case in Wisconsin that got to the Supreme Court (but SCOTUS declined to accept the efficiency gap as a sufficient measure for determining a gerrymander they'd overrule). It remains to be seen if the efficiency gap is really a good measure or a statistical fad.
Their measure of "Competitiveness" also comes directly out of recent research into gerrymandering. People have done similar analysis in Wisconsin and Michigan and determined that they disadvantaged party is not only not getting proportional representation but they would have to win huge shifts in the electorate and huge landslides in order to catch up. I'm not sure this specific proscribed simulation is actually a good statistical method though. The law goes as far as describing the statistical model, saying that each district shall be simulated to shift by a specific formula, and I kinda expect we don't yet have the best model for doing those simulations.

If we're lucky, in the best case, this system will result in a Missouri State Legislature that on average reflects the citizens of that state.

That "on average" is a hedge because I think they'll get a lot of messy districts. By messy I mean non-local, tentacled monsters; the hallmark of gerrymandering. But maybe that doesn't matter? One thing I keep running into around US culture and representative government is that people identify with their place less and less. So, I hear some voices of dissent saying that it's weird to be in a district with some random people over there connected by a squiggly district, but also I hear people not caring about that and just caring about whether they can vote for and elect someone who agrees with their values. If more people can get that, being represented by someone they kinda like, maybe that's a good thing. If the State Legislature more accurately reflects the average of the people in the state, that's a good thing, messy though this way might be.

But it could also lead to 10 years of unmitigated incumbency. Before California moved to an independent redistricting commission, they had a bipartisan gerrymander where everyone had a safe seat and incumbency was rampant. This system could easily produce that. Or it might produce half safe seats and half "competitive" seats designed to be closer to 50/50 between the two major parties. If you're living in a safe seat district, you're stuck with that and your vote (except maybe at the primary) will never really matter.

I'm curious if they'll actually break contiguity or if that will sneak back up to its traditional place next to equal population.

Lastly, with compactness at the bottom of that heap, we can pretty much ignore it.

What About Future Laws?

I also think it's just kinda fascinating that this oddly specific law passed. Missouri Republicans are contemplating a try to repeal it, but if they don't it should be a fascinating experiment in democracy. I guess we'll know how it goes some time around 2022 or 2024. I wouldn't recommend following this law as a model, but hey, let's see how it goes?
Posted by Brian Olson at 11:49 PM 245 comments: